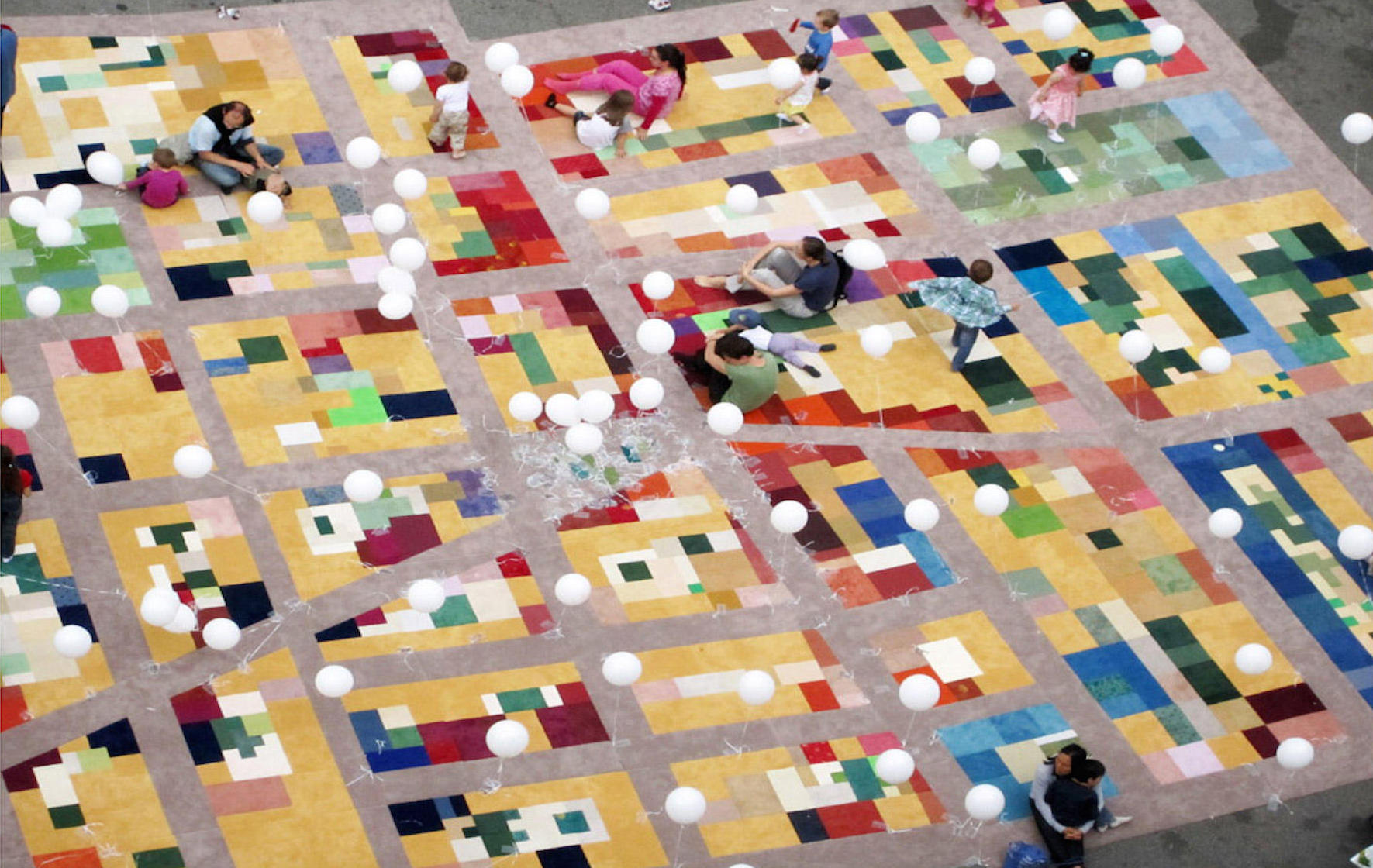 In contrast to the productivity-based, consumerist model which dominated the 20th century, more contributory systems are now emerging. It is within this context that certain artistic creations are presenting another economic approach, in order to more equitably share the richness of our imaginations.

The model which imposed itself on the 20th century is based on an intensive production system and an exclusive consumer functionality which only profit from the richness of our imaginations. In all the fields of human activity, “growth” was shown to be destructive in terms of well-being, cohesion, social equality, the environment… An affluent society? Bernard Stiegler in fact, believes it to be effluent: “No other society before ours made the waste of resources and the disposal of everything and everyone the basis of its functionality.” [1] But, according to the philosopher, we have finally reached the end of this disastrous cycle. The productivity-based industrial model has run out of steam. A new environmental and political awareness is coinciding with technological transformations and technologies which are radically changing our production systems. The digital dawn has influenced this new era: these tools function much more via contributions than via consumption and thereby establish different behavioral patterns. “There isn’t a production centre on one side and consumers on the other”, Bernard Stiegler goes on to explain, “but a network of contributors, being able to alternate and share responsibility for production.” This rhizomic approach closely matches the preoccupation of artists who didn’t wait for the current crisis before exploring other forms of production and diffusion. With significant aesthetic consequences.

By sharing the creation of an artistic work, the artist abandons his role of demiurge. He also accepts to relinquish (partially) his status as author. As such, each person’s designated role becomes uncertain. In this way the group ‘Les Pas Perdus’ (Guy-André Lagesse, Nicolas Barthélemy et Jérome Rigaut) build in consultation using “casual art” ‘Houses of the Ordinary, the Fantastic and other Anniversary Zones’ in order to celebrate in Marseilles, Paris or South Africa “the invention of daily affairs”. Guy-André Lagesse and his accomplices are the catalytic agents: “These people allow us to experience a delicate and refined terrain: that of the extravagance of modest incomes in their lifestyle of elegance surrounded by very little. As artists we identify with their boldness and share with them aesthetic combinations based on daily life.”This “economy” of art proves to be particularly generous and joyful. It believes in the equality of intelligence, as theorized by Jacques Rancière. There is no longer on one side the knowledgeable (the artist) and on the other side the ignorant (the spectator or the amateur), but human beings producing joint performances: “no-one owns this performance, no-one controls its meaning, it is shared by all, preventing any identical transmission or any identity of cause and effect.” [2]

The artist must agree to be displaced, to abandon his prerogatives and his certainties. “We do not impose an already completed script. We create it according to the participants, their potential and their world. And inevitably, such a stance completely throws into turmoil our practice and scripting”, states Caroline Selig, co-director of the ‘Artonik’ Company, who began a project for a participative production (… Et ainsi de suite…) with people having no artistic background. The ‘Anitya’ Company, directed by Christophe Cagnolari, also attached to their ensemble (actors, dancers and musicians) genuine amateurs for a moment of artistic creation in real time: soundpainting (3). “Improvisation reaches to the very heart of live art which must find its precision within what is fragile and ephemeral”, states Christophe Cagnolari. In the context of the ‘Sirènes et midi net’ proposed by Lieux publics, Anitya took over the famous square ‘Place de l’Opéra’ in the city of Marseilles, and gave a public rendering, using eighty citizeninterpreters, of their version of the French national anthem the ‘Marseillaise’.Using a quite different approach, Olivier Grossetête also initiates collaborative projects. In the context of workshops open to the general public, he produces monumental structures out of cardboard. These creations take the form of arches, bridges, façades, towers or shelters, imposing architectural elements rendered nomadic and ephemeral in order to better stimulate a drive for freedom. This collective experience, over and above its public, convivial and federative nature, is seeking to invent ways of repossessing the world by encouraging participants to become the architects of their environment. It goes without saying that all these mechanisms require a lot of flexibility, energy, availability and time, unlike the dominant system of production which celebrates profit, competition and individualism. 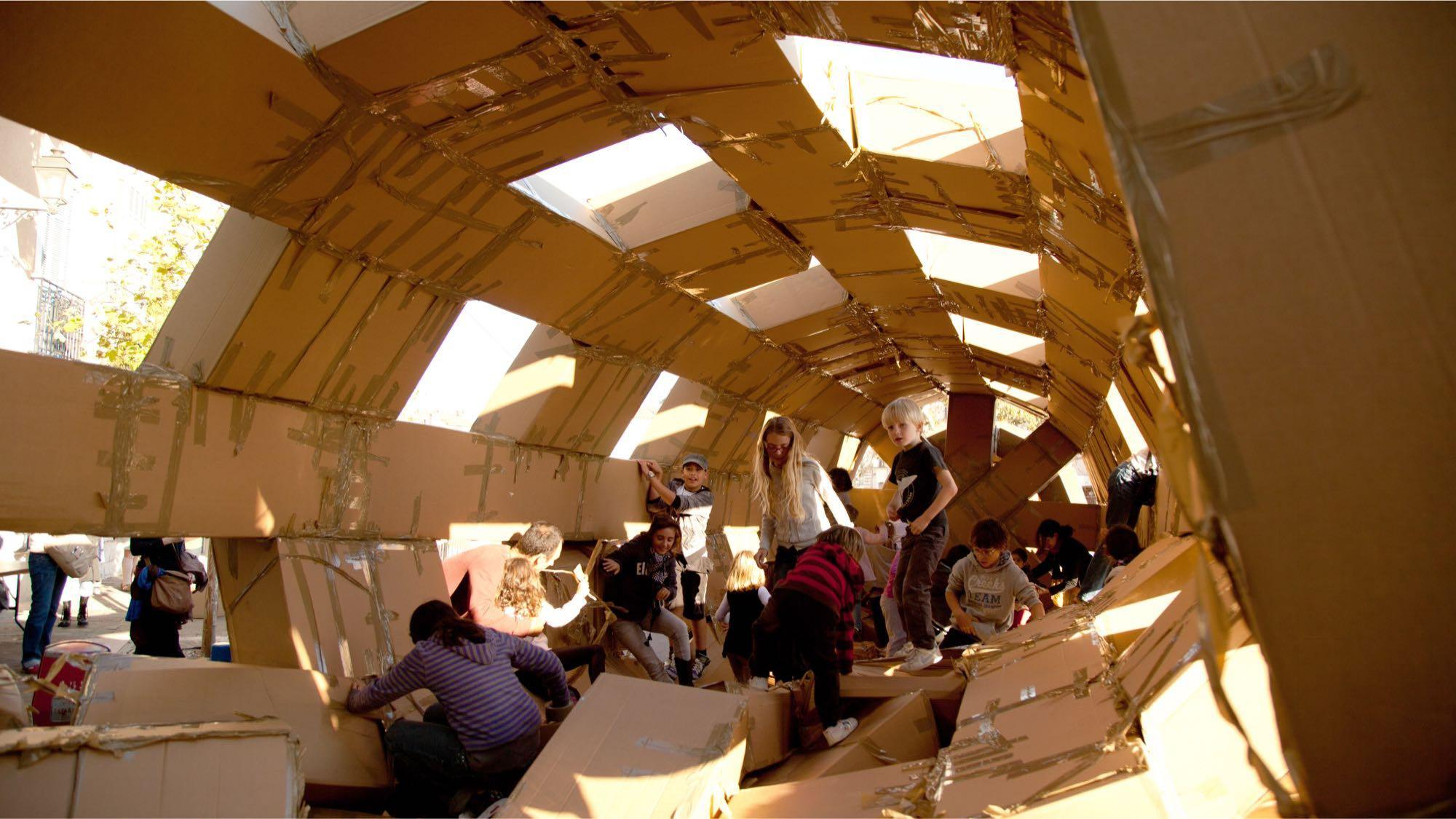 This participative artistic gesture inspires another approach to the economic question. Very specifically, the amateurs are volunteers, and therefore not remunerated. For Olivier Grossetête, the deal is crystal clear: “They contribute work time and as for me, I offer them poetry, possibilities, an artistic experience…”. Here, the use of recycled materials and the principle of collective construction enable the creation of major artistic works within limited budgets. However, “production management can be very tiring, the preparation and support time can be much greater than with professionals” warns Caroline Selig. “The financial factor is never the first consideration” insists Christophe Cagnolari: “the shared experience creates far greater human enrichment.” As such, the practice workshop becomes truly artistic, in other words an environment for “doing” that is both experimental and enjoyable. “Artistic reflection must be outworked if it is to have meaning” adds Olivier Grossetête. “We are not play-acting; we are really constructing artistic objects.”

As for relationships with the public, there again there is benefit all round. “People feel immediately involved with the proposition”, explains Caroline Selig. “It becomes obvious that the performance has been designed to be relevant to everyone, that it hasn’t originated from a distant artistic sphere unrelated to our everyday preoccupations.” Methods of intimidation become unnecessary, and the advantage is clearly to be seen in this area, via a different approach to the socialization of the production by the sharing of responsibilities. This vision implies a major change to the administration, evaluation and production systems as well as to the diffusion of the art form.The ‘Fondation de France’ is indeed experiencing a more equitable sharing of roles with its “New Partners” program. This mechanism is based on the collaboration between three figures: the artist, the citizen-partner and a cultural mediator. The latter receives a request, chooses the most appropriate artist for the project and accompanies them through to the finished product. In this way it is completely removed from the private sphere and benefits the whole community. In Pont-Royal, a hamlet of the commune of Clamerey in Bourgogne, the involvement of artist Michel Verjux has contributed, by the installation of public lighting, to the redevelopment of a port along the Bourgogne canal and to its restoration as a staging post for water-based tourism. In Marseilles, Olivier Bedu has created ‘Banc de Sable’, an architectural work which helped give expression, in both an elegant but light-hearted fashion, to a process begun by local inhabitants and their children (accompanied by the Bureau of skills and aspirations) for the redevelopment of their neighborhood.

There is no longer on one side the knowledgeable (the artist) and on the other side the ignorant (the spectator or the amateur), but human beings producing joint performances

There is no hesitation about inserting projects into the most commercial of contexts in order to highlight their absurdity. The Slovene Masa Cvetko, for example, takes great delight in sneaking into the public arena. Her association ProstoRož invites « experts » (architects, landscape artists, urban developers, designers or jurists), to rethink alternative urban planning. She imagines organizational structures that more closely match the needs of the inhabitants. More recently, Masa Cvetko joined with the Enora group (Ana Malalan, Nataša Mrkonjič, Manja Porle) to confront one of the emblems of our consumer society. This collective has created a Gift Shop, in which anyone can exchange their Christmas presents and thereby rethink their consumer and purchasing habits at that time of year. Each object will be displayed as a work of art, whose only inherent value lies in its capacity to crystallize a relational aesthetic experience.

The risks of exploitation are real, and these approaches do not offer a context that should be heralded as the ultimate model. The gestures and artistic objects that are thereby produced highlight, however, an obvious truth: the economy, even in its most trivially commercial expression, always harbors a symbolic aspect. In every “business” there lies a principle of mutual recognition. The salesman always contributes a small part of himself. At this point, as Paul Ricoeur (4) has demonstrated, the exchange can again become festive. How can this richness be « capitalized », how can such « production » systems be optimized? For example by accelerating the market towards a hybrid economy, which would be public, private, social and interdependent at one and the same time.