Acupuncture #6: "The last drive and the first dance | The shifting identity of Genk" 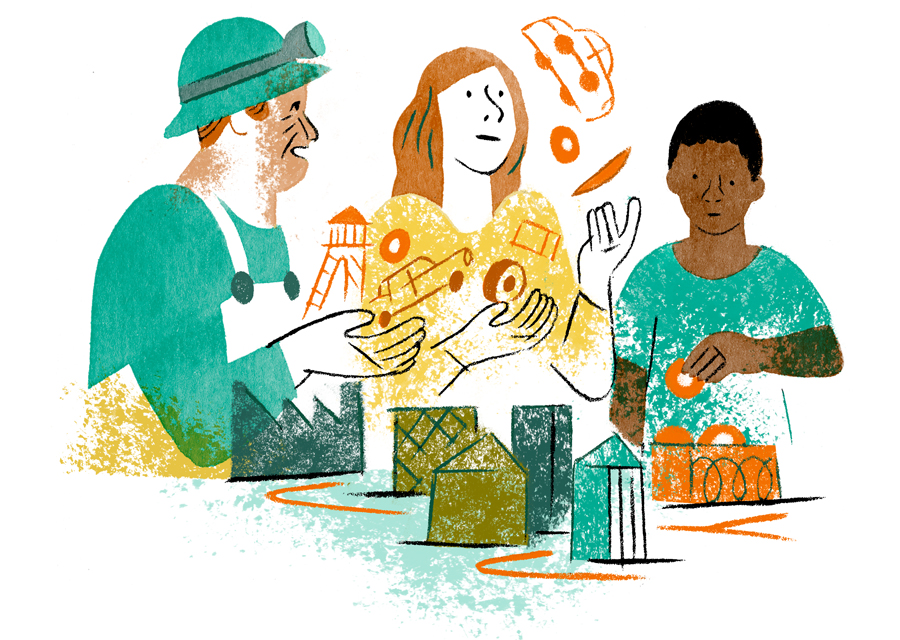 In 2019, Francesca Grilli was invited to do an "Artistic Acupuncture" in Genk (Belgium). She found creative potential in the city's background by connecting different times, eras and generations. In close collaboration with Provinciaal domein Dommelhof.

It’s truly impossible for every single place in the world to remain equal to itself for a long period of time. Cultures, people and places do naturally transform their essence, nature and identity due to the unstoppable evolution and development of technology, science, ideas and philosophies generated by humankind.

Today’s cities are intercultural hubs and their communities are interwoven in an increasing environment of diversity. The so-called phenomenon of globalisation has accelerated and given higher visibility to all these processes of interdependence, mobility, interconnection and mix that characterise contemporary society. This context of diversity has become the perfect scenario for many thinkers and creative people to analyse and portray the contemporary world.

The philosopher, Jean-Luc Nancy, in his reflections about identity, hybridity and community – collected in the book Being Singular Plural – stated that: “The unity of the world is nothing other than its diversity, and this diversity is in its turn nothing other than a diversity of worlds. A world is a multiplicity of worlds, the world is a multiplicity of worlds, and its unity is the sharing and mutual exposition in this world of all its worlds” [1].

This constellation of “a multiplicity of worlds” is also an affirmation that static models do not exist, and everything is in a constant process of change and evolution.

Some models experience a crisis, fail and collapse, some others emerge and thrive, and everything moves forward in a mutable and unpredictable way. What today seems eternal, tomorrow may be completely lost and forgotten.

The processes of transformation have different configurations, pace and outcomes according to the places where they occur, but it is certainly true that today’s global society moves at a faster pace than it did decades ago and several big changes may happen in the course of a single generation.

A fundamental passage – experienced through different phases and modes in the last half century – is the transition from the industrial to the digital, from the material to the immaterial, from the solid to the liquid, which somehow defines one of the major changes in our current society and era.

Within this notion of the ‘transitional’, the artist Francesca Grilli (Italy) was invited to develop her artistic Acupuncture mission in Genk (Belgium) focusing on the cultural identity of this mining city and its need to reinvent itself.

Delving into the layers of Genk: an exploration from the past to the future

The potential of art and culture in post-industrial contexts has been widely explored and tested. From the famous example of Bilbao in the Basque Country, where the presence of the Guggenheim Museum has literally revolutionised the image of the whole city; to the wider context of the Ruhr region in Western Germany, where a massive coal mine complex became home to one of the most attractive cultural hubs in Europe. These conversions and transformations are still happening and facing many challenges in different areas of Europe and worldwide.

The case of Genk fits perfectly into this historical landscape where huge coal mine complexes have confronted the phenomenon of deindustrialisation by investing in and promoting art, culture, education and the creative industries. The organisation of Manifesta 9 (the European Nomadic Biennial) in 2012; and the development of the C-Mine site – a creative hub working on four key themes: education, creative economy, creative recreation and artistic creation and presentation [2] – demonstrate the direction that the city of Genk and its administration have been taking in redefining the identity of the whole area.

Francesca Grilli – with the collaboration of Fariba Mosleh who was invited to join the artist during the research phase – started her explorative journey by addressing the historical past of the city, mainly focusing on two specific elements of its industrial memory: the mines and the Ford Motor Company.

The mines have played an absolutely fundamental role in the redefinition of the identity of Genk during the 20th century, not only by increasing the population and transforming what was a village into a city, but also by attracting a very diverse group of people, now with over 100 different ethnic backgrounds. Their era reached a final point when the last two mine complexes closed in 1986-87.

The other important dimension of the economic development of Genk was represented by the Ford automobile factory. After 51 years and the production of around 14 million cars, Genk's Ford plant closed its doors at the end of 2014, with the loss of 6,000 jobs. The successful industrial history of Genk was suddenly becoming memories of the past with no more tangible ties to the present reality.

The dismantlement of the Ford factory, linked to the vivid memories of the end of the mining era, brought about a profound change in the identity of Genk. A sense of economic instability, a feeling of vacuum, a generational rupture and an uncertain future were somehow spreading through the city’s general atmosphere.

In order to develop her Acupuncture mission, Francesca Grilli went through these historical layers of the city, before jumping into its present time and imagining its possible future. In this creative process of connecting different times, eras and generations, the artist participated in a series of encounters with people of different ages, who gave a solid narrative and structure to her ideas and visions.

In this deep journey through the cultural identity of Genk, Francesca Grilli has identified four people who represent two different generations, two different worlds and forms of social life.

The meeting with Ronny Mouton, a former Ford worker and a social activist, was a fundamental one as he gave the artist the idea of working with cars, as a symbol of Genk’s past. Mr Mouton talked about the friendship and human bonds that existed in the factory, remembering that: “people came from everywhere. There was a lot of diversity and different nationalities, but we were all working together on one car, and that was very important”. He told the artist the story of the last car produced in the Ford factory, which is now kept in the city hall car park and used by its employees. From that moment the artist thought about the possibility of involving Ford cars in her project as a symbol of the industrial history and the workers of Genk.

The meeting with Maria Morgante – a retired Italian folk singer who belongs to the first generation of immigrants from Southern Italy – sparked the artist’s reflection about the the different generations of migrants who are central to an understanding of the cultural identity of Genk.

From the first generation of immigrants, the artist moved to the third generation, meeting with Alberto Mazzoni and Fabrizio Ginnesi at the city Youth Centre. Alberto and Fabrizio showed the artist the underground music and dance scene in Genk, where they are both involved: Alberto as a hip-hop singer/composer, Fabrizio as a b-boy dancer. This meeting was very important for Francesca Grilli as it showed a new reality of the Genk cultural identity. Beyond the mines, past the industrial heritage and the factories, there is an underground movement of young people creating music and performing rap style.

The conversations with them addressed different issues related to the complex and multiple backgrounds of younger generations: the mix of nationalities, the mix of languages and the mix of religions and beliefs that create a more fluid identity.

The research and the artist’s encounters revealed the flows of history and cultural identity, showing that nowadays we are all composed of multiple particles and stories that make us plural, with elements from the past and many other elements coming from our present experiences.

The proposal: taking the past while embracing the future

Moving through this inter-generational context, the artist mixed together all the diverse elements encountered in Genk, aiming to address, reveal and connect the layers of past, present and future that constitute the shifting cultural identity of the city.

The two main elements that finally emerged from the research phase, and that will constitute the artist’s proposal, are cars and dance, the first representing a solid and concrete monument to the past, the second as the immaterial element of the free expression of younger generations of Genk. 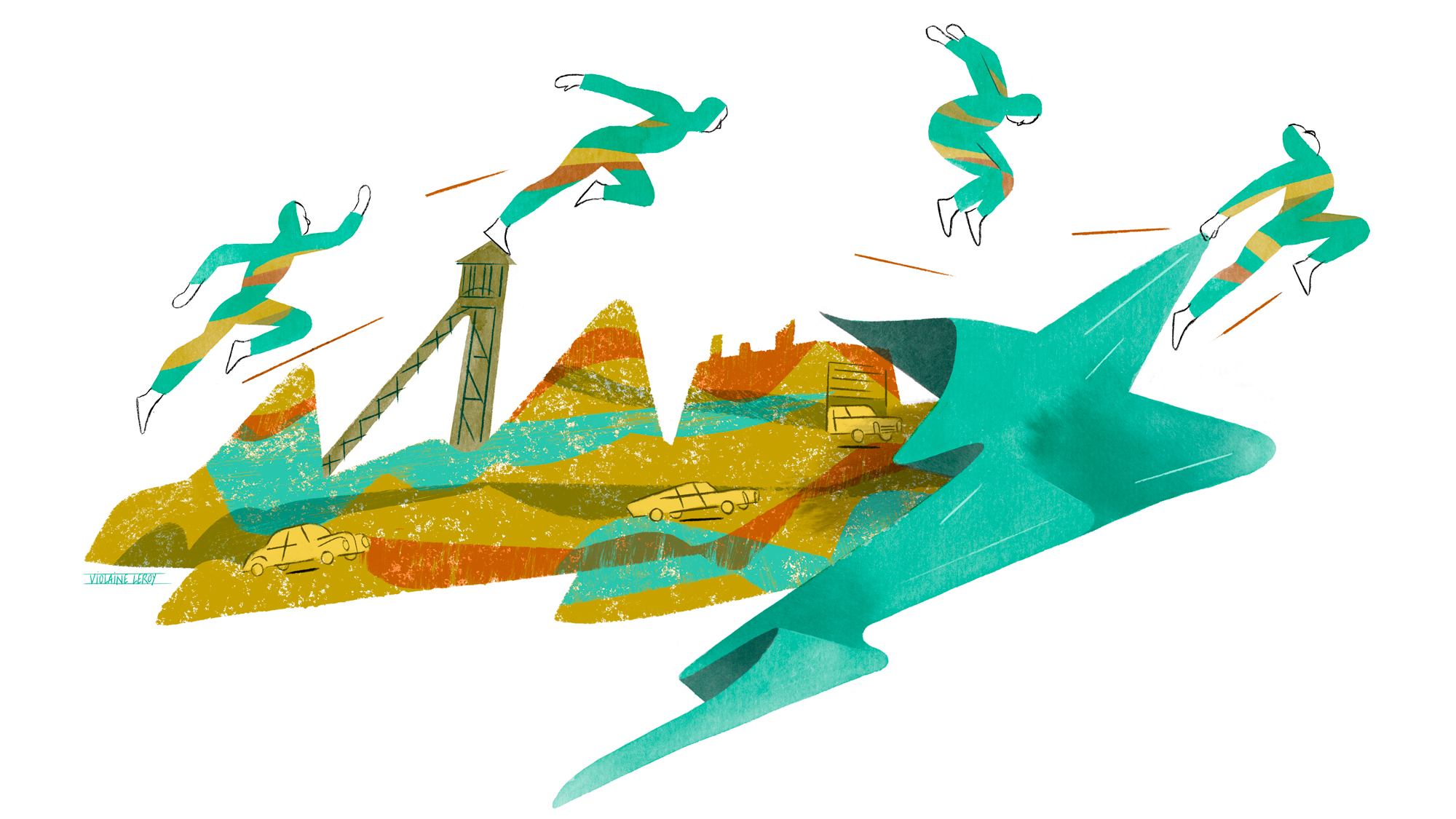 The artistic proposal envisions a performance between cars – painted gold to represent preciousness and monumentality – with the dancers and audience in public space.

As specified by the artist: “The golden cars will be driven by the different new generation of immigrants: everybody involved will be a dancer. The cars will be free to move in the town. Audience members will get into the car as a guest and the driver will start to tell a story about their life, about their journey to Genk. The parade will end at a car park where the group of hip hop dancers, will wrap each car in a cover, while dancing on them”.

As noted in a conversation with Hugo Bergs – IN SITU member from Dommelhof /Theater op de Markt – the artist would like to take the past while embracing the future. Francesca Grilli expressed that: “A sense of new beginning is perceptible in my performance through the new generations driving all the inhabitants of Genk within a specific place: with this car parade where a dozen golden vehicles come together, the heavy past of the city will take another shape. By covering the golden Ford cars, the performers will close a period of the history of Genk, leaving space for the new to come”.

The history of places and people doesn’t stop, and the different cultural identities are always embarked on a journey of transformation whose composition and direction remain mostly unpredictable.

“Artistic Acupuncture Missions” took place in Europe between spring 2018 and late 2019, hosted by 9 IN SITU partners, as part of the ACT project (2016-2020). The concept of this experimental artistic research project is as follows. The partners invite a foreign artist to spend up to six days in their local context to tackle a local issue they have identified beforehand related to one of three themes: social justice, cultural identity and urban renewal. During her/his stay, the artist receives insights from local politicians, activists, social workers, inhabitants… With a traveller’s eye, a fresh and perhaps slightly irreverent way of looking, she/he will come up with a proposal for a future artistic intervention. This proposal may or may not be realised. It will be valued as a unique artistic perspective of a specific European context, illustrative of the artist’s particular way of reading social spaces.