Acupuncture #3: "A space to call their own | The voices of the community in the post-industrial district of Csepel, Budapest" 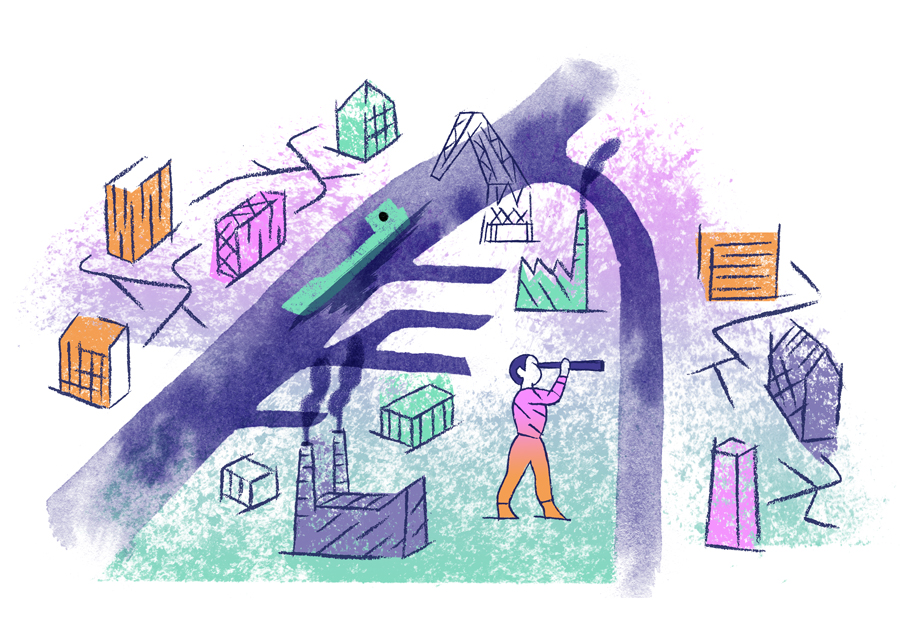 Artistic Acupuncture 3#: In 2019, Nada Gambier and Mark Etchells explored the post-industrial district of Csepel, Budapest (Hungary). Within this artistic research, both artists focused on concepts of cultural identity and urban renewal, in close collaboration with Artopolis Association / PLACCC Festival.

The word ‘isolated’, originating from the Latin insulates, literally means “made into an island”. From this geographical association, the term took the meaning of “standing detached from others of its kind” or as a synonym of being remote, far, distant, lonely, out-of-the-way.

The concept of isolation, in our specific case, can serve to introduce the post-industrial district of Csepel, located at the northern end of Csepel Island, right between the more famous districts of Buda and Pest, in the Hungarian capital city. Stretched between the bends of the Great Danube river to the west (Nagy-Duna in Hungarian) and the Little Danube to the east (Kis-Duna), the district of Csepel is home to around 85,000 inhabitants.

The sense of isolation in Csepel comes not only from its geographical situation as an island – an urban island, surrounded by the urban context of a big city – but mostly from its current social situation, where the lack of opportunities, resources and public policies has led to a general atmosphere of depression and indifference among the different communities living there.

Heavily influenced by its industrial past, the recent history of Csepel seems mostly to be connected to the Manfred Weiss Steel and Metal Works plant, a huge factory built in the 19th century. The history of the industrial complex went through very diverse and peculiar moments: its production was mainly focused on weaponry and arms during the 1st and 2nd World Wars; then, between the wars and after 1945, production moved from armaments to bicycles, in fact it became one of the largest bicycle manufacturers in the world. During the communist era, the factory’s workforce reached almost 40,000 people and the huge industrial complex was a busy manufacturing system for multiple products. Starting from the 1980s, and especially during the privatisation waves of the 1990s, the factory went through periods of neglect and breakup, becoming essentially an intricate network of multiple owners and tenants that today share the approximately 240 hectares industrial area, where many buildings are in an abandoned state.

Beyond the massive industrial complex, which constitutes a kind of autonomous city inside the district, the residential area of Csepel replicates a similar situation where that atmosphere of decline and indifference has a direct impact on people’s living conditions.

Within this context, the Artopolis Association from Budapest invited the artists Nada Gambier (Belgium) and Mark Etchells (United Kingdom)“to work, through the prism of Urban Renewal, on the identity of a post-industrial district, and the civil participation in the redefinition of an urban environment.”

The IN SITU partner from Budapest has already organised several activities in the district – e.g. bringing there part of the PLACCC Festival – and keeps working with a strong will and intention to build an active community involvement of the neighbourhood.

Conversational practices - the voices of Csepel

As they specified at the beginning of their research in the neighbourhood:

“Many of the people we talk to aren’t interested in the plant. Their daily lives circle around their neighbourhood, the immediate surroundings where they live and work. We decide early on to follow a strategy we have been using for the past three years where we familiarise ourselves with a place through the subjective stories of locals. We accommodate that with our mission’s specificity and our plan becomes to meet an urban developer, a priest, a factory worker, a teacher and so on. A mixture of people directly involved with the re-thinking of Csepel and people who live there. We give ourselves the task of better understanding the current climate and focus on how locals could be empowered to improve their lives.”

In that process of digging into the collective history of the district, through the subjective stories and perspectives of its inhabitants, the huge complexities and contradictions of the area began to emerge.

The main concern is the lack of community spirit and a generalised sense of indifference that crosses the neighbourhood. As affirmed by Tunde (a primary school art teacher):

“There is no centre in Csepel, no space where you can get a sense of community spirit and gather. There are cultural centres but they are dying. Two years ago, we wanted to organise an event for children. We invited a famous writer to come and read to the children but the local council said no because they were renovating the streetlamps so then we tried to go elsewhere but that was also not possible so in the end we had to give up.”

Other voices pointed in the same direction of concern and frustration. Attila (the owner and director of TST Machines) claimed:

“People like me, who were born here, like the area but there are many people who don’t care about it. They just think it’s their temporary home. Csepel has about 80,000 inhabitants so it’s like a mid-sized city in Hungary but its position doesn’t correspond to that. The lack of facilities and the lack of independence maintains us in a bad position.”

Another central issue is, obviously, the reflection about the factory and its ambiguous existence: on the one hand, it is seen as a distinct resource with lots of future potential; on the other hand, it represents a space which is abandoned, risky and dangerous. The voices collected by the artists give a sense of this dual view. According to Imre (a priest):

“The industrial plant is a very interesting area. It looks like it’s falling apart but when you look closer it has its own beauty. I go biking there sometimes but not at night time. I wouldn’t dare go there after dark. It would be nice to see it resurrected because it would create work for people but on the other hand it would also be a very bad idea for the environment.”

“The plant is an intangible and immeasurable entity but we aspire to access this and try and put in into a context for the future development of the area. It is too valuable a resource to dismiss.” 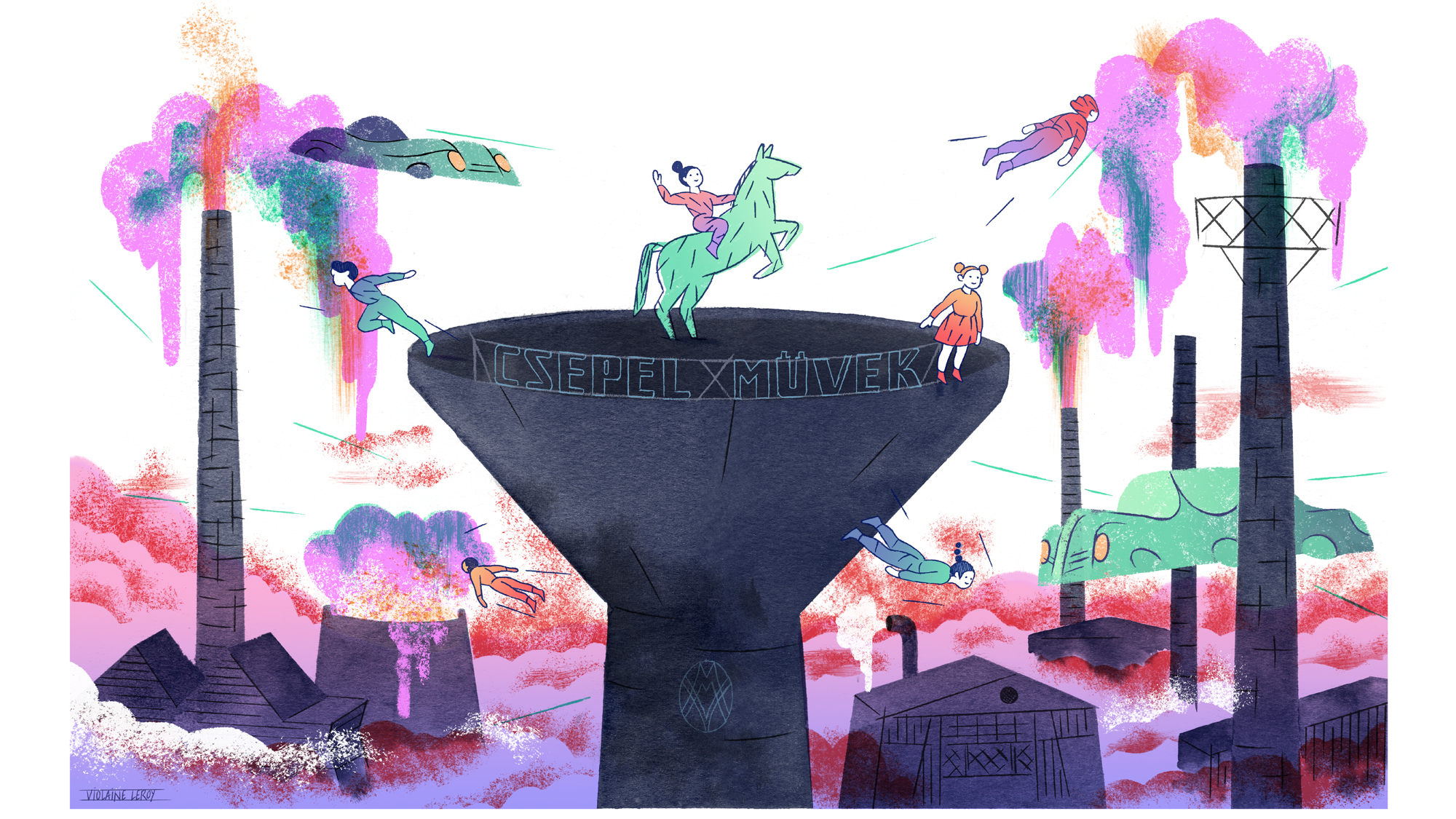 During the days of their field research in Csepel, the artists walked around the whole area and collected – together with the support of the local partner of the acupuncture – diverse voices and memories, with the specific purpose of creating a locally focused timeline of historical events related to personal experiences, starting from 1956 (the date of the Hungarian Revolution) to today.

This large quantity of information and dynamic material was then reviewed by the artists, who decided to create an edited timeline that became the starting point for a performative dialogue with a group of youngsters from Csepel.

The idea of collecting a comprehensive Voice of a City in Csepel couldn’t be fully realised by only looking at the past. For this reason, the artists planned in their proposal the idea of creating another timeline – from today to 2040 – with a group of young people (aged 8 to 14) to project their visions and aspirations for the future of the district.

This process was realised in September 2019, when the artists presented a performative action in the Csepel Sports Club, a historic and well-known location in the district. Nada and Mark worked with a selected group of young people (8 girls from the same school) for a few days, focusing on the diverse testimonies gathered during the research phase, and collectively they created a script with a final timeline ranging from 1956 to 2040, mixing glimpses of the past and images of the future.

During the performance, the kids read the artistic composition of the timeline and, together with the artists, presented an installation about future names of the streets of Csepel.

As emphasised by the artists, their main attention and efforts were focused on the process, rather than on the final performance, and on the long-term elements and traces that can remain after their conversational experience in Csepel. Activating community participation in the redefinition of an urban environment, especially in a complex context like Csepel, is definitely not a quick and easy task. Nevertheless, what is really worth striving for is to activate the spark of imagination. As some of the young girls involved in the project envisioned:

“In the future Csepel will be on a planet made of sugar; cars and trains will be floating; people will be able to fly and riding horses will be back in fashion.”

These utopian images could hopefully pave the way for change and be the starting point for a new process of community building and active citizenship.

“Artistic Acupuncture Missions” took place in Europe between spring 2018 and late 2019, hosted by 9 IN SITU partners, as part of the ACT project (2016-2020). The concept of this experimental artistic research project is as follows. The partners invite a foreign artist to spend up to six days in their local context to tackle a local issue they have identified beforehand related to one of three themes: social justice, cultural identity and urban renewal. During her/his stay, the artist receives insights from local politicians, activists, social workers, inhabitants… With a traveller’s eye, a fresh and perhaps slightly irreverent way of looking, she/he will come up with a proposal for a future artistic intervention. This proposal may or may not be realised. It will be valued as a unique artistic perspective of a specific European context, illustrative of the artist’s particular way of reading social spaces.